Inspired by a post which I found Fabian Steeg's blog, I purchased the Arduino Microcontroller and started to assemble various little projects. If you are in Germany I highly recommend to get the controller from Fritzing.
When I started wiring the hardware I purchased a book by make:

It is really a funny book and a nice introduction into electronics, with all kinds of weird experiments. Essentially I am into the idea that they invite their readers to break stuff.
After some initial brain storming I came up with the idea, that for my first real project I'd like to create a robot which is capable of making movies. Hence it should be able to move around without bumping into stuff and have a pan and tilt tower where the video camera is mounted.
After some research I found a twin gear box made by Tamiya: 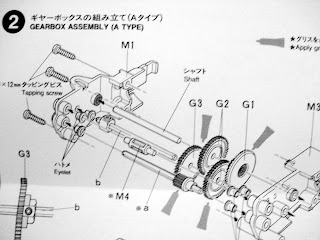 This will replace the standard motor for the tracked vehicle kit (also by Tamiya).

The gear box is already assembled and I am still waiting for the chassis to arrive from Hong Kong. Meanwhile I am constructing the IR Sensors and the pan and tilt tower. The two required servos are already working. Now it still requires some metal work to put all the pieces together.
Posted by Joheinz at 6:09 PM No comments: Links to this post